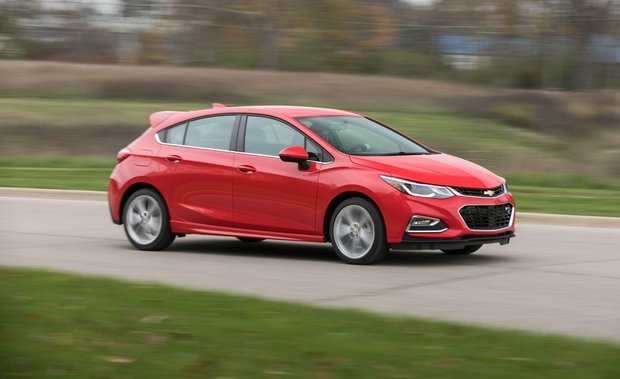 Robert Pankratz is a teacher/principal in rural Manitoba who had a problem which is no doubt familiar to drivers who spend a lot of time on the highway.  Between getting to work and back and driving kids around, he was putting on 60,000 km a year on average.

Four years ago, he became exploring diesel.  His first thought was to buy a Volkswagen Jetta with TDI – but Volkwagen’s emissions controversy dissuaded him.

“I was sitting on the beach one day researching online the most fuel efficient vehicles,” he recalls.  “To my surprise, the Chevy Cruze came up.”

The 2014 model was the first Cruze to offer diesel as an option, he points out.

So he bought a Cruze with a diesel engine at Vickar Community Chevrolet and was very impressed with the performance.  “The mileage was incredible and the model had tons of power,” he says.  “It was the best car I ever owned.”

Unfortunately, Pankratz’s 2014 Cruze was wrecked in an accident last year.

Because of his positive experience with the Cruze diesel, he went back to Vickar to buy a new 2018 Cruze.

“There are a couple of different options with the 2018 Cruze,” he says.  “You can get a sedan or hatchback. And heated leather seats are available.”

There was one hitch, though. Pankratz wanted a model with a manual transmission and none were available in Winnipeg.

“There were just two available in Canada,” he says. “Don Lachance (Vickar Community Chevrolet’s general manager) was able to find one for me in Sudbury and arrange to have it shipped to Winnipeg.”

Pankratz notes that he has recently returned from a 10,000 km round trip to Prince Edward Island and a tour of the Great Lakes.  “I averaged 5 litres per 100km,” he reports. “At points, I was doing 90km an hour.”

He says that he took the trip with a friend.  “We were driving as much as 20 hours a day.  At times, we slept in the car – just had to push the seats back.

“I have been very happy with my new Cruze.”

One minor complaint that Pankratz has – that may be a welcome feature for others – is that his vehicle is too quiet.  “I like the sound of the diesel engine,” he says.

He is also has to take care when filling up to make sure that the attendant knows that the vehicle is a diesel model.  “I have a small sign in the back that spells out TDI,” he says.

For more information about diesel options, phone Vickar Community Chevrolet at 204 661-8391 or drop into the dealership at 964 Regent W.