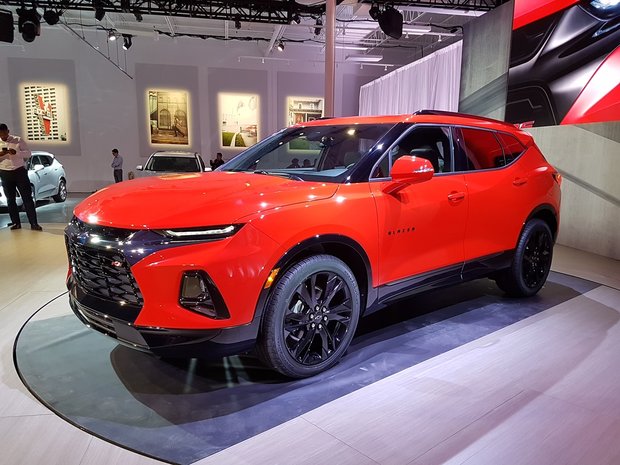 In lieu of the Chevrolet Blazer hitting its 50th Anniversary since it was first released, Chevy has brought it back, in an all-new much more modern way.

For starters, the original Blazer was a more of a truck than a crossover, with a choppy ride and a larger engine. This all-new version is a crossover with a unibody structure, and a much smaller engine set to reside beneath the newly sculpted hood. This two-row CUV will position itself between the Equinox and Traverse in terms of size, amenities and performance.

In terms of design, this is definitely the most daring and modern in the current lineup of Chevrolet SUVs and crossover (of which there are six now). The front end of the 2019 Chevy Blazer looks to be lifted directly from the Camaro, and the family resemblance to the sportier sedans in the automaker’s lineup is undeniable. The Blazer is a head-turner for sure.

Inside, the 2019 Chevrolet Blazer shares amenities and design layout with the Acadia. In terms of tech, this crossover’s got plenty, with no fewer than six USB ports, a wireless charging pad, electronically operated glove-box, trailer-guide system, and the usual lane-keep and blind-spot monitoring you’ve come to expect on modern SUVs and crossovers.

The 2019 Chevrolet Blazer will be available with two engine choices. A standard 2.5L inline-4 will produce 193 horsepower, while the more powerful 3.6L V6 will be good for 305 ponies. Both engines will be paired with Chevy’s 9-speed automatic and will come standard with AWD.

The all-new 2019 Chevrolet Blazer isn’t set to arrive in dealers until early 2019, but you can definitely find out more about this modernized retro crossover from your local Vickar Chevrolet by heading down there to speak to one of our experts. And you might want to put your name on a list for test drives, because when it finally does arrive, we guarantee there’ll be a lineup to check it out.