YOUR 2018 COLORADO IS WAITING FOR YOU AT VICKAR COMMUNITY CHEVROLET 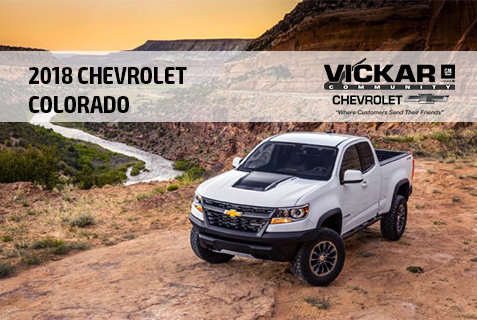 Vickar Community Chevrolet has taken delivery of its first 2018 Colorados.  Vickar truck specialist Rod Neufeld notes that the midsize truck was refreshed for 2017 but the 2018 model does have some new features.  The V6 engine now comes with an 8-speed transmission which makes for improved fuel efficiency in city driving, Neufeld says, and the Active Tow system – standard with the LT trim and higher -  helps the driver align the pickup when reversing to hook up a trailer.

In celebration of General Motor’s one-hundredth year of building trucks, GM has introduced two new additions to the Colorado line-up, Neufeld adds.  These are the ZR2 Midnight Edition and Dusk Edition models.

As with all Chevy trucks, the Colorado ZR2 is built with durability in mind, including a fully boxed frame, roll-formed high-strength steel bed, and Duralife brake rotors.

Performance features include an off-road suspension with cast-iron control arms and segment-exclusive Multimatic DSSV dampers – which make the truck equally effective on and off the road.

For more information about the 2018 Colorado, contact Rod Neufeld or any of his colleagues at Vickar Community Chevrolet at 204-661-8391 (vickarchevrolet.ca) or drop in at the store at 964 Regent Avenue W.